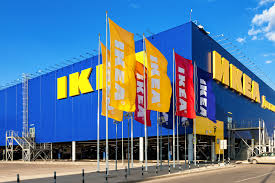 I'm partial to Ikea. Mostly because I just like the field trip down memory lane. Growing up around my Swedish grandfather and the traditions my mom carried down into our family, there is a wisp of familiarity walking through an Ikea universe (can't really call it a store...).

It's a lesson in conflict management. Just in case you think that too academic a term - remember conflict management is also violence prevention. While the news is chattering about the one year anniversary of Charlottesville, the solutions can be found in a distinctly culturally marked export doing well in Europe, the Americas and Asia.

It's simple. Maybe so simple the human's desire to complicate issues so our ego driven monkey-brain can pat itself on the back doesn't understand the solution:

Know who you are. Preserve your culture (should you choose). Adapt a little to facilitate acceptance and collaboration.

Problem solved. Yes. I believe it is that simple. The Ikea lesson looks like this;

Opening a store in India? Cool. Make the cafeteria substantially larger because it's a family outing and they are gonna do this together...like with the cousins and grandparents. And in India, families like to hang-out when they lunch. Weather's a wee bit different than in the U.S. or Europe so all that untreated pine is gonna turn to mush. Make less of the pine stuff and more of humidity-proof materials. Did we mention meals are a family event? Sell more sets of stackable stools for when the guests arrive.

What if you're in China? Balconies, baby, balconies. Showrooms need to show balconies because families have them. Southern China's balconies are used differently than Northern China so...adapt the showroom depending on where the big blue building sets up residence.

The linchpin in conflict management is common ground. Find It. Work with it. Monuments in Charlottesville are either a visage of oppression or of history. Why not both? Because, well, they are both. If I want the monuments gone I am asking for an aspect of history to be openly and clearly acknowledged. If want them to stay? Same goal.

Yes. Ideology becomes a territorial marker over which I can play monkey and throw poo. Us v Them. It feels good to belong to something that feels super important. Want to be all about upending oppression? Donate your time and your efforts where oppression still exists. Volunteer in the community centers of impoverished neighborhoods. Join Teach for America and work in inner-city schools lacking funding for basic supplies. Don't have the time? Means you may have the money. Donate that.

Don't have the time or the money to spare? You have a voice. Speak to solutions that reach for resolution spring boarding from common ground.

A friend of mine, Randy King, recently posted a simple statement about free speech. You believe in it or you don't. Meaning if you believe in it than the NeoNazi's get to pass out their pamphlets just as freely as the petitions demanding the destruction of Civil War era monuments. It's a hard truth because we don't like it. Prejudice and violence based on race, heritage, religion, gender identity...'good folk' know it's wrong.

Oh. But then there's this. Good folk 100 years ago new it was wrong for same-sex folk to marry, only the depraved believed otherwise. My how times have changed ....  only they haven't. We're just dividing ourselves over different cultural markers.

Sometimes common ground can be damned hard to find. But it's there. And sometimes Frederick Dougglass is right too. Sometimes power concedes nothing without a struggle and sometimes that struggle requires blows aka violent action. But if it's reached that point, somewhere back up the historical timeline we had forgotten ourselves and when the collective surrenders it's power sometimes taking it back is gonna' be a bitch.

And hope burns eternal: if the inherent power of all human creatures is on the table for all to see then Collective A is unlikely to surrender itself in the first place. And should the fear of Different cause Collective B to cross the boundary, B will meet notable resistance. Power is like that. Stick a pin in an outlet and...

In self-defense we teach people how to be a High Risk -Low Reward Target. It's an invitation to power. If there's a room full of High Risk - Low Reward folk, the potential for a Charlottesville (in that room) drops. It drops because everyone there knows everyone else there is equally capable of devastating action and frankly, we just wanted to have a beer.

Ikea is a powerhouse in the retail universe. It can go to "foreign" places with it's cultural identity in tact, places where it's blonde-haired, blue-eyed stereotype is a distinct Other. And it is successful in collaboration anyway.
Posted by Tammy at 5:03 AM