Alice's adventures down the rabbit hole just got interesting 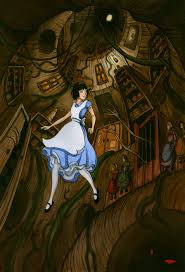 Two time-encompassing things have happened these past few weeks.  One both internal/external time monster and the second mostly internal.

One: Kid got married this past weekend. Lots of time and energy and totally worth it.Weird to be in this phase of life in which I have a kid who was in the right space in life to be getting married. It's a threshold of sorts. Yeah, yeah, we can do the whole "how did I get this old" or "when did I become an adult" thing. While it's a little accurate - it's more about this new space that is opening up in life. For him, for me - still letting it settle in to see what it all means.

Two: finalized a draft for the second article on stalking, 2 of an intended 3 part series that started with the post on boundary setting and stalking (here). Or so I thought.

I'm a BTDT girl with stalking. Oh. That doesn't read well. As in have been v. have done. Twice. You know the whole thing about experience as the best teacher and experience being a by product of not having always been the sharpest crayon in the box.....

After several conversations I think I can finally finish the article and the series. I haven't created a magnificent masterpiece. Far from it. What I think I can finally articulate is the complexity of stalking, boundary setting and the tangle of humans as both predator and prey tangoing with the twisted social scripts creating this minefield.

Research indicates there a couple different taxonomies for types of stalking. They are descriptive and naturally incomplete. I could create another taxonomy - I may just to make finalizing these articles easier. I have been avoiding doing this but I think it's going to be necessary. The easier thing would be to scrap the project altogether because here's what the conversation with my flag throwing friend created - when anti-stalking laws hit the books (launched by California in the 90's), a line was drawn. Good behavior on one side and Bad (punishable) behavior on the other. Humans like this distinction. Simplifies shit.

Only stalking does not play nice with this distinction.

I can finish the article series because I have accepted I can't get it all neatly tidied up. That's where I was getting stuck. Every time I thought I was on the right track I discovered I was really just writing my way down another rabbit hole. Playing with the Rabbit Hole/Warren metaphor, I have decided I don't need to neatly outline the labyrinth. I am just going to play around in the tunnels and see what happens.