no one wants to see that -

And as usual, reading Anna’s work gets me thinking. In the Krav world, there are video clips about women fending off assailants. Some of the videos have a professionally produced edge, other videos are clips from classes or vignettes of potential attacks role-played out to show how effective training can be.

I haven’t seen a single one that is realistic. In all the “encounter” video demos, our successful heroine is mostly unscathed. The hair might be a bit tussled, maybe her hoodie is off kilter or she has to pick her purse/backpack up from the ground.

No one is bleeding. She isn’t limping. Her clothes aren’t ripped or torn. No busted lips, no red handprints left on her throat, no black eyes forming and nowhere in any of these are she even tearing up, let alone crying.

She walks confidently away from the scene. Good advertising? Assuming this is what women want to see? We’re missing the trembling, hands shaking so hard she can’t use her phone to call for help. We don’t get to see the disorientation or the difficulty in forming complete sentences.  Or the waking up in the middle of the night – or the staring at the ceiling because she can’t sleep, or ….

Who wants to see that? And if we made self-defense clips like this I’m guessing there would be a violent outcry against the gratuitous violence.

No one walks away from a violent encounter smiling confidently. Maybe from a potential purse snatching that doesn’t go beyond an aborted snatch and grab. Maybe.

Violence is ugly. If she gets slammed against the car, it is going to hurt. The action is going to stun her.  Her head will snap back and bounce off the vehicle. If she fights back, her attacker will probably fight too. That’s going to send shock waves of pain through her body. If she gets hit, it’s going to leave a mark. After the violence ends, she is going to experience pain. It may last for days.

Using realistic violent attacks against women for marketing would be a mistake on so many levels - it’s not really worth the ink on the page to unpack. I’m pretty sure everyone gets the problem with it.

Somewhere though, at some point in the timeline of her training, someone needs to have the hard conversation with her. If she is one of the 4 of 5 women who have not experienced violence, she needs to know the confidently dusting-self-off video clips with crumpled (staged) men on the ground is not going to be her reality if violence ever invades her world. She needs to get the power and wisdom of avoidance and de-escalation. And, someone needs to tell her she will survive the pain – she will sleep again, she is going to be different – and that’s okay.

There is nothing pretty or inherently confidence-building about a violent encounter. Even if you win. It hurts and there is an aftermath. It doesn’t end when you adjust your hoodie, pick up your purse and walk happily down the sidewalk because you have bested Goliath.
Posted by Tammy at 6:00 AM No comments:

Email ThisBlogThis!Share to TwitterShare to FacebookShare to Pinterest
Labels: self-defense 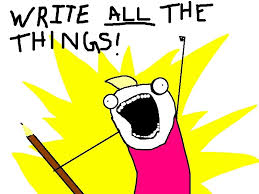 Too many things I want to write about results in me staring blindly at the screen with a resounding...yup, I got nothing- and then suddenly...paragraphs spiraling down into what may be one of the dusty secrets in the martial arts world...may be

Got started with this one: do I pick up on the last post and stir deeper into the conversation about sexual assault, rape culture? Murky waters charged with deep emotionally charged contexts - got a whole lot of words on this one but I don't know if there's any point to it sometimes.

Or do I venture into the twisting threads about our judicial system and duty and self-defense? On the back side of a court appearance as a judicially approved "expert" in the field of violence dynamics - again I have a whole lot of words and at the same time...none. Questions mostly too, the difference between duty and justice and if they stand in opposition to one another, what weighs most heavily? Is there a "should" in there somewhere?

And then there's this. The most annoying little bouncy ball hitting its way around inside my skull at the moment. Annoying because it doesn't seem to be losing inertia and annoying because my monkey brain feels the topic is both moot (it applies to so few people perhaps) and incendiary (because where it does apply, half the band will be really unhappy with the dialogue).

Here's the This. A question really, one with an assertion behind it. Asked by a colleague -yes, a female colleague in the martial profession.

The question: I wonder how many women who have made it as professionals and moved out from under the wings of their male instructors got punished for it?
The assertion: a lot of them, maybe even the majority.

The observation: when the guys leave from out underneath and go on to create their own business, work, etc. in the martial field - their male instructors feel betrayed, angry, pissed, stabbed in the back...to a degree. Before too long though, they're back to talking, even training together and collaborating. But when the women do the same thing the punishment runs deep.

The women's businesses are openly maligned. Rumors generate about how their ranks weren't legitimately earned, how they really aren't all that 'good' as instructors, practitioners, or whatever the context may be. People beyond the original instructor relationship get on board and shunning happens. And the punishment goes on much, much longer than what seems common when the same dynamic goes down between male instructor - and his male student-turned-instructor.

Important - the initial reactions of "thou shall not ever leave one's instructor-ever -ever - ad infinitum" are equal to both the women and the men who violate this deep martial arts control driven protocol. What's interesting, is my colleague's observation that it eventually dies down between the male students-turned-instructors and not so much with the women.

This observation sat and cooked and careened around like a Superball perpetually rebounding off the walls. And now there are three more questions, at least...
1) how isolated v. how prevalent is this dynamic?
2) why do martial arts instructors (male as this is still the majority) who help launch female instructors take on this intense level of possession over the women and their freedom to pursue what may be possible?
3) and to what degree does she, the instructor-to-be unconsciously assist in accepting the collar and it's invisible leash?