Another round of assumption-making and the problems it creates.

context: long term, chronic, injury? finally getting aggressive about treating it, specialists involved this time and maybe -dare I hope? a measure of success.

Primary specialist says, let's do some PT in the meantime but not the strength building normal PT - you don't need that. I want you to get xyz - and would prefer you use our people because they'll do what I want. Translation: they work with our patients primarily and know me as a doc so they won't run off on a rail.

Now. I have my own guys. Close to home, close to our gym. As a Krav instructor over 50, I'm a frequent flyer. But here's me thinking...well, you're already going one step further with this whole thing, go all the way and use her people instead.

Problem 1: PT is deciding the doc's orders aren't correct for the problem. Hmm.
Problem 2: Oh you definitely need the strength work - of course you do
Problem 3: and this is the big one. Making an assumption about who I am because of my age instead of who I actually am.

Addressing Problem 1. ME: okay - you have to make the decisions that you feel medically, ethically are correct. I get it. Before I come back for the second appointment, talk to the doc and explain to her why you're not following her script. Because I'm going to an unhappy camper if when I do my follow up with her in January - she says "no, no, no - you were supposed to do xyz, I need you to go for another round and do what was prescribed". So you talk to her before I come back, cool?

PT: silence (eventually she capitulated to the orders of she was going to NOT follow).

Addressing Problem 2: now this was interesting. We did the strength work. And I am definitely not anywhere I should be having paused all strength work over 6 months ago due to said chronic condition just getting aggravated by everything. Immediately maxed everything out and when I asked "how far" I was supposed to compress a round resistance circle thingy and she says "just as far as you can" and I collapse the thing on all 40 reps and she says..."oh".  And then, "well, next time we'll had some weights, I guess -if you want you can add weights at home"

Addressing Problem 3: on a stretch she asked for, I commented -"no stretching really but it's wanting to cramp and tighten the hip flexors and that's a problem...I've been working diligently to get that flexibility back and I can't afford to start over again" PT says..."well that's okay, sometimes you have to compromise for what needs to be done"
ME: not going to happen - this is not a viable option - I need all the flexibility I can get (at this point I have already explained what I do for living most days)

PT finally says after Problem 2 elements walk themselves out...tell me again what you do? ME: again brief explanation PT: what does that mean? ME: more explanation  PT: oh, so it's a little intense sometimes? ME: sigh.

Yes. I am over 50.
Yes. I am female over 50.
Your job is to see the patient in front of you regardless of the automatic assumptions and preconceived notions about what age and gender prescribe your reality to be. Maybe this autoscripted response is why so many woman remain physically weaker than necessary, more easily injured than necessary and more dynamically a workable viable target to a predatory Threat.

See each woman for who she is - where she is. That's a good start. 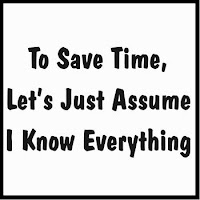 Humans love us some assumption – at an intellectual level we understand how dangerous assumptions can be – but our monkey brains just love the stuff. Like a Claymore, assumptions guarantee collateral damage. This is not a lightbulb moment. The scatter blast damage zone of an assumption is a foregone conclusion. Hence the “you know what you do when you assume, you make and ASS out of U and ME”.
Here’s one that gets me curious and when my monkey gets all excited, frustrated and annoyed. And pissed, if I'm being honest.

“All women who train in self-defense have been attacked and have issues.”
Both pieces of this assumption are a trap. They trap the assum-er and they trap the target of the assumption. The assumption traps these women into a specific reality and by nature of the assumption, victimizes.
If I am a woman who enjoys rehabbing my natural predatory instincts and have never experienced an assault (of any kind) and you assume I have been the target of violence, your assumptions shuts down an entire aspect of my liberty. I am not free, not really. By your assumption, I am not free to take possession of my future, I am not free to choose how and where I play. There must be a dark and scary driver, or I wouldn’t be here. My past is in control of my choices…not me.
Fact 1: women have the capacity to be damned effective tactical agents. Studies show women can be better equipped for combat than men due to a myriad of brain wiring natural to most females.
Fact 2: playing the way tiger cubs play – practicing the hunt, pounce and kill sequence is fun. Baby predators play the way predators function. We are predators and because we are humans, we learn to play throughout our lives.
If you assume I have been attacked = I have issues to work out you are going to expect me to quit my training at some point (because I'm all better now). I don't get to be good because I just want to be. Thanks for that.
Moving on. Let’s say I am a woman who does have a history of violence and I train in self-defense seminars, classes, programs. This does not automatically preclude I am doing this for fun. The history does not naturally prohibit me from choosing it because I enjoy it. At some point along the way there may be a process of testing social conditioning and programming from a violent encounter, conditioning equating to a belief of “victim”. Cool. Very cool, in fact.
To presume women with a history train only to work through issues is remarkably delimiting. The assumption means once the issues are resolved – training is done. She moves on. Okay, maybe that happens and it’s perfectly fine. But if she continues to train, indefinitely, the assumption is going to drive the you have issues label deeper and deeper. Making her more and more pathological. This is a good idea…how?
It’s not binary, folks. If Susie trains to overcome feelings of victimization and helplessness and then moves on to other things once that is accomplished, good on her. If Sally trains to overcome same victimization/helplessness and then discovers this is just a metric ton of fun, she gets to do that. But if we make it binary – then Sally’s issues just get bigger, worse, more pathetic the longer she trains. She is more victimized instead of less...
Really. Think about it. Do you really want to cast that on her?
The redundant habit of assumption is a monkey brain function and has the capacity to create tribal rules/protocols. Those protocols become beliefs and those beliefs become fact.
And all along that unfortunate timeline, the women who train become sentenced to deeper levels of presumed victimization.
So much for empowerment (which sucks as a word anyway as it is so overused).
Next time you have a thought about women on the mat – check it – teach your monkey a little humility and remind it assumptions are a sign of weakness. Strong people get curiosity is a higher order. Only strong people test their beliefs against assumption and trade tribal bias for curiosity.
Be a strong person. Let women who choose to train define their own reasons and prescribe their own futures.