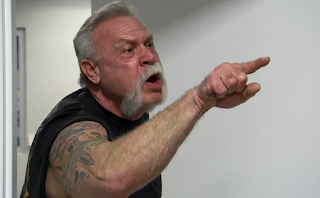 Lob a criticism my direction and once I get over myself (human nature is to bristle), I try to take a breath and pick at the critical words for truth I can use to improve my teaching, business, or how I engage people in general.

Sometimes criticism just doesn't bear merit. The physical distancing and therefore, physical and emotional safety found in attacking folks across the spectrum of the inter webs has created a medium for the Other forms of expression criticism represents:

"...criticism is an easy form of ego defense. We don’t criticize because we disagree with a behavior or

- a need to feel powerful
- a reaction when our beliefs or anything we value is threatened
- jealousy
- a need for attention (great way to get it when we attack other people because humans love to stop and watch collisions of any kind)
- boredom
- entitlement
- when feeling criticized directly or indirectly, we bite back
- when we've been reprimanded (because taking responsibility isn't a lot of fun and criticizing the messenger IS)

Why write about what so many people have already written? I've been trying to figure it out because it looks like such a waste of time - and it is a robust trend both in social media in general, and in the self-defense world specifically.

Post any material on self-defense and someone is going to go after you. The attacks are typically devoid of value-add information. Statements tend to distill into variations of "don't learn from this person/school/style, they'll get you killed. Find a good (fill in the blank with a style that reflects the writer's preferred training method) and you'll be safe".

I got curious about why criticism is so abundant in the self-defense world and based on the research on criticism in general, I looks like we criticize out of:
fear
loyalty
threatened beliefs
and possibly too from jealousy & boredom

The other motivations for criticism are probably peppered throughout the realm of the self-defense industry, those just seem to be the highlights.

I've done it. Hate to admit it, but I have. I've seen a video of a self-defense action and have disagreed with it and felt like it was somehow necessary to add my voice to the clamor. Mostly when the info has been posted in a discussion group - to my recollection I haven't done so in just a general public electronic environment.

I think the self-defense world can add another explanation/motivation to the list: self-defense is a particularly emotional topic. This means our limbic system, what we affectionately call the monkey brain - is running the show. Our logic centers are snoozing while our internal 5 year olds party.

So then, why is it that self-defense is such an emotionally charged topic? Violence is as old as our species. Older actually, it's inherent to the physical universe. It's pretty straightforward but we get really torqued up about it.

For many folks, violence is a particularly personal reality. Violence is the reality shattering Alice's Looking Glass and scattered across the floor. Among the jagged shards of glass lie our expectations of safety, security and in a way...entitlement. Entitlement that it will never happen to me - or someone we love - or some ideal we hold as tantamount to holy...like, bad things won't happen to good people.

And so violence threatens it all. Our fears, our loyalties, our beliefs, our boredom, our values, and our entitlement.  Our need to feel powerful is interrupted and if we have trained in martial arts or self-defense of any kind - we want desperately to believe in the unicorn, the magical elixir of safety.

It doesn't exist. And that's OKAY. It never has, really. In western middle class cultures, humans live more safely on a day-to-day basis than perhaps at any other time in history. We feel like we all own unicorns. MORE safely. More. It's a comparative. There's less safe and increases in safety than what many folks currently experience and somehow, the comparative falls invisible.

Being alive means being at-risk.

Back to the point. I have seen self-defense advise I disagree with. Telling women to pee on themselves to avoid being raped, for example. I will continue to disagree with it, vehemently most likely. I am also going to try and remember that most people who offer self-defense advise are making at least a small effort toward helping someone else. And although the advise may be ill-gotten, the motivation is worth acknowledging.