The Edge of Truth 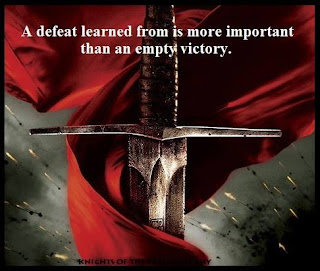 There are a ton of those suckers. All those inspirational quotes are true. And they are hollow.

Had a rank testing yesterday for first and second ranks in the MA system we teach through at our training center. I start testings out with a grounding. We talk. Or rather I talk and the students are polite enough to pretend to listen. They would rather get on with it or have me drone on to delay it - either way...it's polite. In the grounding I tell the story about one of my gradings from a few years ago. Two evaluators - one I had just met a few days prior at training camp and the other the head of our system who I have known for several years.

After the grading was over they sat me down and said - we could pass you, you have the scores albeit a bit borderline -but we could pass you. We aren't going to. Then the new guy (who has since become a friend) says this: at this level I want you to have more confidence in what you know. You know the techniques but you followed your training partner over the cliff a couple of times into a mistake. So we are holding your pass for a bit...

I tell this story to students because although I was less than amused, I understood what the new guy with the funny accent from across the pond was trying to do. And I knew he was right. It sucked. It was also a pivotal point in my practitioner career, my personal perspective as an instructor and ultimately as a human being.  All those hollow inspirational quotes are true.

Failure is finding the edges of your truth (and I think that one belongs to Maija). It reveals how we see the world, how we judge our own self and how we measure that self against what we think is reality. That kind of growth is transformational and it's painful.

I think about yesterday's testing and I think about the pass-with-flying-colors people and the people who passed on the bubble and I notice the struggle. I haven't met anyone yet who deliberately walks into an evaluation with the hope of a 'failure'.  The cultural distaste for failure is almost a DNA level problem and I wonder if it is DNA in a way (failing at the hunt or shelter building = dead human). I notice how much I don't like the idea of giving a no-pass result to a student. I have done it. I will do it again if that's the reality of it. I don't like it.

One - it is a reflection of the teaching which is always on me because if I didn't teach that student directly, the instructors I teach did, and that's still on me. I know it is also on the student - s/he is responsible for the level of work, training, etc. brought to the party. Mostly, I don't enjoy the disappointment on his/her face.

I want to magically transport students to the other side of the process where they will experience the deep value of what the experience brings to their lives. I think mostly I want to be on the other side of this mountain because of one of the things I can't control in this process. I can't control whether or not they will take the journey into value. I have some colleagues and friends who will never - ever participate in a grading unless they are 1000% sure they will pass. They have never experienced a failed grading. And they never will because they will never risk it.

They will never find the edges of their truth and the place I get to play in my life right now (which I wouldn't trade for anything) is because the edges of my truth failed. The world got bigger. Richer. Deeper. And for all that? I would still rather not fail - the cultural programming is just too damn deep.

*the picture is by way of Kasey - who wrote an awesome bit on confidence recently
Posted by Tammy at 6:37 AM