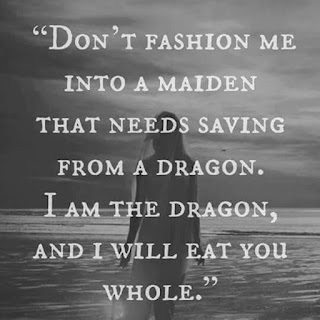 Access. The ability to gain entry - to reach for something. Been thinking about this for a few days because it is a hardcore requirement if you are ever going to go physical in a violent encounter.  Biologically we are predators, right? Deeply domesticated predators, albeit, but predators nonetheless.

What does it take to gain access to that native programming? Is there a point along the scale of domestication when it is bred completely out of us? House cats still have hunting programs. Even the uber-domesticated ones will still chase down a bug even if they aren't entirely sure what to do with it once they catch it.

I'm thinking about this (again) because I spent last weekend at a Krav Maga instructor update training camp. Working with another female instructor who is in her own right, a formidable practitioner - this question bubbled back up. Put a gun in her hands and ask her: will you have any problem pulling the trigger...ending someone if your life depends on it? Her answer is no, no problem.

Take the gun away and things change. Self-defense is about getting away. Get safe. It's not a fight. Fights are competitions and surviving violence should never be a freaking competition. There's an unfortunate reality though - in dire circumstances getting safe will require actions that may be as lethal as pulling a trigger. Working skills under that reality, she struggles. Half her body is trying to leave and the other half is trying to train the drill. Literally. Fascinating to watch and according to her - fascinating (and frustrating) to experience.

There's something wrong with having to teach someone to do something for which they are biologically programmed - instinctive programs are not acquired skills. So it has to be about access. Stripping away all those layers of domestication. I don't think we can teach that either.

We can create opportunity for it in training, sure. And hands on experience with violence can create a direct line to that instinct. Not talking about simulations here. The been-there-done-that-gave the t-shirt away- hands on experience. And there have to be other ways to open up that access. Partly because I have seen the opposite happen after a violent encounter. I have seen violence drive the person into a deeper abdication of instincts. Maybe because the last thing that feels right is to take on the characteristics of the attacker...

But at the moment, that's not really what bugs me. If the only way to strip off all that domestication is up close personal experience with violence then only people who have encountered it stand a chance of learning how to prevent it from breaking bad. Except this is an again conversation now and that's unacceptable.

There is a way to train that comes close. Scenario training for one. But it's still simulated and part of the brain knows that.

Shouldn't have to share those been-there t-shirts with people as the method for clearing paths back to our native programming. If you are in possession of one of those t-shirts you know exactly what I mean. There have to be other tools for clearing away all that domesticated overgrowth blocking access to our native predatory capacity. Otherwise, the only people who can find their way back are the people who have survived violent encounters. Not a fan of the implications...
Posted by Tammy at 7:33 AM