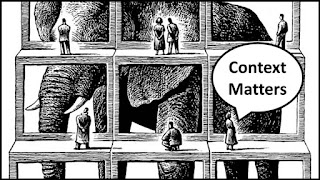 Context is everything and in a way...it's irrelevant.

Starting with the irrelevant side. Humans are constantly and continuously pulling data points and information from a broader context and applying it to their/our own lives. I suspect we 'have to' do this because there are too many data points - too much information, particularly now, to not extrapolate and apply. The original context often gets lost as we weave the information into the meaning of our own journey and... does it matter?

I don't know - does it add value? Read an article this morning about a new term: textjack, it's what happens when someone uses a biblical quote in a way that isn't actually how it was meant. Happens all the freakin' time and has for centuries.

It matters to theologians. It matters to the woman being beaten under the idea that she should be submissive to her husband and made the grave error of disagreeing with him. It also matters to the emotionally and physically exhausted athlete who leans on her own use of scripture to help her dig deep in a final game, just not in the same way.

Does it add value - maybe that's one of the measures for whether or not the context matters and I have a suspicion that humans pretty much re-contextualize everything, always and that overall, it's such a hard core 'just is' that talking about it may be like pointing out water is wet.

Acknowledging this academically and cognitively opens up a deep opportunity for connection between humans who might otherwise really polarize though, so maybe worth a discussion.

It also helps me wrestle with a glitch.

The event: I say something and humans in proximity do what humans do and hear what I say in a context that adds value to them - and out-of-context to what I am attempting to communicate.

the glitch: I don't enjoy being misrepresented.

On one hand, it serves as a fantastic checks/balances. I learned a looonnnggg time ago that I am responsible for the impact of my communication. If something lands differently than I purposed, it's on me to correct. It was easier when all my communication was contained in a circle of people I interacted with. Whether I was teaching a seminar or in a meeting, I could check and recheck. I could listen and ask questions.  I could self-correct and stay in the conversation with someone until the communication was working. Working doesn't mean agreeing, it means producing valuable outcomes.

I have written a bunch more stuff that's "out there" thanks to the internet, and have taught at more seminars and passed a tipping point at which I can no longer check in with every human who interacts with my communication. Once in a while something cycles back to me - something I said and it's immediately clear that the listener took my communication "out of context".

I don't know how other humans experience this, I don't particularly enjoy being misquoted or misunderstood. It really bugs me when the recontextualization happens around subject matter I carry a lot of passion for. The first time it happened I was 26 or 27 working as a teacher in an adaptive behavior classroom for Deaf/Hard-of-Hearing students. I was in grad school and burning hours I didn't have to burn in a local community theater way out on the outskirts of Baytown, Texas. I'm not a fantastic actress and Broadway would have laughed out loud, but I loved it. The little local newspaper did an interview of the cast because of the nature of the play we were rehearsing.  I was misquoted. I lost my shit. I was all like....what can I do about it? I need to call the reporter...call the paper...blah blah blah.

A dear friend a few decades my senior- smiled and then laughed when he realized I was authentically upset. Really? Like the tiny local newspaper matters and it's one sentence and...basically get over yourself.  Eventually I got over myself but it still bugged me. Personal glitch.

Anyway, recently ran into two examples of how what I was sharing was contextualized by the listener in a completely different context than the conversation I was in/having.  In one example, I don't know if there is any value being gained from the re-contextualization. It's mostly unhappy troll-ing. In the other one, as best I can tell, there is value in the re-contextualization. Like example one, in example two the person didn't like what I said, thinks what I said is wrong and probably also wrong again for sharing it out-loud with other people.

Okay. Got it. Self-correcting next time I give the presentation in question to be more specific in my language because I think the message is important - the message I intended anyway.  Important enough to be damn sure I add in a clarifying distinction the next time around.

And - I get to see again what we do. How humans re-contextualize pretty much everything in life so that it works in our own worldview and at the end of the day, even if I am misquoted and even if the misquote is purposed to disagree with me, or discredit me, if there is value* - then trying to re-communicate may not be all that important.

That's the struggle. I know it's a personal glitch and usually that means I need to just shut-up about it. When the re-contextualization changes the meaning or the purpose of the message and the message a)  is potentially really important and b) not material I came up with (I didn't decide water is wet, but I am responsible for communicating that correctly nonetheless) - then it is on me to retool my communication. My monkey brain wants to whine...that's not what I meant...

The reality is, no one gives a rat's ass what I meant. And this experience is a really good reminder -

Sidenote: Value. I don't mean "value" as in a pedophile misquoting me so that he or she finds justification in having sex with more 5 year olds...as an example...as far as I know THAT has not happened. By value, I mean life gets better for the individual and as it gets better for them, it doesn't get worse for everyone else, as it would with the pedophile...as an example.