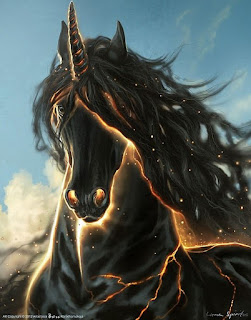 I've been called a lot of things over the years. Not all of them complimentary. Sometimes it bugs me, because I have a monkey brain and it likes to be liked but for the most part, I realize that if EVERYONE liked me or supported what I stood for then I'd be doing something wrong.

Recently, someone told me I was a unicorn. He meant it. He said a female self-defense instructor who:

was a unicorn. Typically, I wouldn't take being called a fairytale creature a compliment per se, but I get it and I know this guy and I understood what he meant.

And no, they're not the same thing. Martial Arts and Self-Defense are not synonymous. There is crossover and sometimes a significant amount of crossover. There are elements of martial arts training, including the combat arts, that can be applied to self-defense. These truths do not; however make martial arts and self-defense synonymous.

I have seen what the Unicorn Tracker identified. I have seen female instructors being really 'male' on the mat. Posturing, dominating, moving and walking with a more male gate....and not because they relate as a male from a gender perspective...but because somehow they must have felt it was necessary to be respected and effective.

I have also seen female instructors with a victim history making everything they teach about the victimization. A war of sorts. Us v. Them. I get this perspective too. There is a passion born of experiencing the sensation of utter powerlessness when being physically and psychologically overwhelmed by violence.

I could be either or both of the above. I'm not entirely sure why I'm not. And the only reason it matters is that I would like for the Unicorn Tracker's statement to become moot. It would be great if there were enough female self-defense instructors to meet the instructional demand. I have a deep respect for the guys who reach out and ask for help, direction and insight into the landmines they should avoid when teaching self-defense with women. They are taking on a task they have to shoulder because there isn't much of anyone else to do it.  Good on you, gentlemen.

I don't know how to do it - and I don't know if it's really actually possible. But it would be cool as shit for Unicorns to loose their designation as rare - it would be fantastic to look out across a room full of self-defense instructors and see as many women as men...more even.

Maybe in the generations to come. In the meantime, I'm noodling around on what the catalyst would be - what it would take to transform the mythic connotation from meaning rare, to meaning fantastically abundant.