Before all the IT security people lose their shit, I am not publishing anything that could compromise any of my accounts, take a breath.

Over the last 5 years I have used log-in names etc. to reflect the next goal in my Krav Maga journey. It started when I went for my Instructor certification and Graduate Level 1 rank (number 6 in our system). It started because the internal conversation was snorting. You know, that laugh that is so spontaneous it's out before you can censor it? The one that blows milk out your nose because well, what you just heard is stupid ridiculous? That one.

To combat the milk activating laughter in my head, I made my log-in reflect the goal. Like "instructorkm1" ...no IT peeps, that wasn't it -just an example.

It became a talisman for me. Instead of eyeing a finish line in a marathon, the log-ins reminded me of what was next, even when I was snorting milk out my nose.

For the last year, the info has reflected a goal I was certain was impossible. Krav Maga Global's Expert 1 certification. If you are a belt rank person, this is test number 11 and up until recently in the U.S. there have been 2 women with that one checked off. Inexplicably, I made the number 3 last month in Israel. 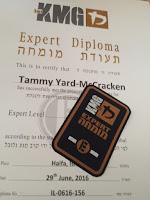 The goal isn't all that impossible if you have the necessary prerequisites. Things like lots of years of training (in contrast to my 5). Putting in several hours a week in preparation for the test (which for many reasons *cough* excuses, I didn't). Not being over 50 and not being a smaller than average human. Younger, stronger, more experienced and physically fit-er practitioners would not see the E1 as a steep mountain climb. For me though, it looked like a good opportunity for the milk-nose experience.

When Expert Camp started in Israel, the pregnant question was "are you testing?" My answer was honest: I'll give it a shot. I knew I would get valuable feedback from the experience and I wasn't up to par, I would have another chance in the U.S. later this year. The honesty of the answer struck people as odd. People tend not to test unless they're damn sure they can pass. Failing is like a scarlet letter.

I don't relate to it that way. Yes, of course passing is the goal and yeah - it feels great. NOT passing isn't the kiss of death though, the deepest lessons and biggest jumps in my skills have come from the places where I fell (literally and figuratively).

The test was no joke. In my testing group there were 6 people. One not yet eligible and testing for feedback, 5 testing for real. Two of us passed. My monkey brain is very happy. It feels good. And it feels...well...yeah, still looking for the word. What do I use for a log-in now? There are more E Levels I can go for but I'm not eligible for another 2 years. And that really isn't the point anyway. Those look attainable now.

The world shifts. Reality rewrites itself when the impossible becomes part of the daily 'sure, I can do that' conversation in my head. The nose-milk relationship is gone. I suppose moving into this territory could look like a good place to settle down. Like the westward expansionist settlers who breached the rocky mountains...alive. Done. Good enough. Build a cabin.

But....something happens when you land in new territory. We can enjoy the terrain instead of finding it daunting and insurmountable. And then, then we get to find new. New realities. Deeper contact with what it means to be human and what it doesn't mean. I don't know what the next log-in will reflect. Not yet, anyway. So for now, it can be a question.
Posted by Tammy at 7:35 AM