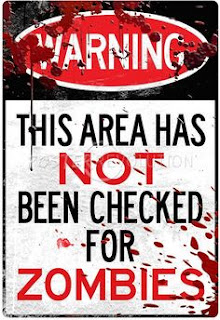 The Walking Dead usually means Zombies. Dead, decaying humans come back to life with one purpose, eat brains and make more Zombies. I guess. I'm not a Zombie aficionado.

There's another version of Zombie. They're much harder to spot. They aren't gray and awkward and they don't gnash teeth or move crazy-fast or anything else Hollywood has designed.

These zombies are more subtle and consist of human beings desperately mangled by an intense commitment to the actuality of their own assumptions.  If you drink your own Koolaid you are the walking dead. Here's why:

1. Buy your own assumptions and you lose the possibility of growth. Humans are growing/moving/changing or they are decaying. You won't be curious. You won't ask questions. You won't try anything new. What's more, eventually your lack of curiosity will be seen by someone as combative and pick the wrong day/wrong person and your perceived combative attitude could escalate into a physical confrontation. If that never happens? You're still not much more than an ambulatory corpse.

2. Believe your world view is the sum total of universal truth and you are going to consistently violate the territorial rules of other tribes. You are going to offend the protocols, violate territorial boundaries and step on someone's status. Friends, the family of your partner or spouse, colleagues...eventually you will piss off just about everyone and you will be categorically alone. Humans are not designed to function well in isolation. Biologically, we don't survive long enough to reproduce if we are doing it all by ourselves. Take this up a notch and the entrenched assumptive reality might just piss off someone just like you but with a different assumptive reality and someone's going to break bad.

3. You won't see it coming. Another way to apply the phrase Walking Dead (maybe more accurate to say Dead Man Walking, but it doesn't play as well),  if you have a specific set of assumptions about who can-will-might successfully ambush you, you won't see it coming. Flip it around and you might set hooks for a physical encounter and be damned surprised by the firepower your assumptions dismissed.

Number three may need some explanation.  A couple of weeks ago we had a new guy walk through the doors of our training center. He is looking for a place to "keep the rust off" - career operator. A little bit of ego around the edges but overall a decent guy. And a big guy. Over 6 feet and pushing 250. He shows up for a class taught by one of my female instructors. AM is maybe 5'2'' on  a good day and barely breaks 100 pounds. He struggled through the whole class. Finally, he looks at her and says "but you are so small!" Her answer was awesome. "Yup, and I'm probably not getting any bigger".

In his world, dangerous people are big, strong men. Can he overpower AM? Duh. Her size isn't what makes her dangerous. She is well trained and I have seen her in action, she is fierce. But for this guy, she is doubly dangerous. His assumptions about what makes up a Threat define his reality. If he meets an AM on a bad day she will have the advantage. Dead man walking.

We all have assumptions and biases about reality and how "things are supposed to be".  If you disagree with that, then your assumptions are already running you. You are a Zombie-in-training.
Posted by Tammy at 10:04 AM